The Amulet Thief (The Fitheach Trilogy #1) 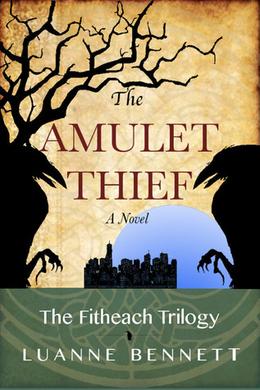 Alex Kelley was just five when her mother was murdered by what appeared to be the act of a psychopath. But when she returns to New York City twenty-one years after vanishing, she’ll learn that the truth is much more complicated than a random killing, and the necklace her mother gave her days before the murder is something worth killing for.

Her first stop is where it all began––a peculiar shop in the heart of Greenwich Village filled with oddities, ghosts, and secrets. It’s here that the game begins and those secrets begin to unravel.

When her necklace is stolen, she’s thrown into a strange world intertwined with Manhattan, filled with all those things that shouldn’t exist. At the helm of this world is the mysterious Greer Sinclair who takes her under his wing as they search for the missing necklace. It’s an amulet that holds the fate of the world. But he’s not the only male vying for her favor. Constantine––a satyr with a penchant for voyeurism who just might hold some of the answers––has his eye on her, too. Under the watch of both, she’ll set out on an elaborate hunt that will ultimately lead to the biggest secret of all.

The line between the mundane and supernatural worlds is starting to blur. And as Alex fights her annoying attraction to a man she doesn’t quite trust, she’ll fall deeper under his spell, straddling both worlds before realizing the latter may be the better fit.
more
Amazon Other stores
Bookmark  Rate:

'The Amulet Thief' is tagged as:

The 'The Fitheach Trilogy' series

Similar books to 'The Amulet Thief'

All books by Luanne Bennett  ❯

Buy 'The Amulet Thief' from the following stores: