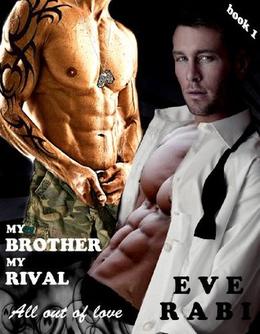 “You will laugh, cry and yell with this book, you won't be able to put it down once you start reading it!” Amazon reviewer

Description:
Cody Garrett, a former Navy SEAL, has never met a skirt he didn’t fancy. His six-pack, rugged looks and bad boy image ensures a steady stream of hot babes waiting to slip him their phone numbers wherever he goes.
So, he is confused when Bridie Barker refuses to go on a date with him.
It’s not like she’s a stunning beauty or something. According to him, her ears are big, she’s well-rounded and she’s not even a D-cup.
In spite of her shortcomings, the more she pushes him away, the more he finds himself thinking of her.

Twenty-year-old Bridie Barker has control issues. Every detail in her life is planned.
Her closet is color-coded and she has an array of storage containers, to ensure that everything is in its correct place.
Her whole world is black and white, and grey areas are a no-no.

When she meets the warm and grounded Scott Garrett, she thinks she has found her soul mate. Unfortunately, and to her disappointment, things don’t pan out with Scott.
While waiting tables, she has a disastrous run-in with his brother, Wild Boy Cody Garrett, King of Body Shots, who parties every night with a different girl.
Even though he’s good to look at and makes her laugh, she turns down his advances as he’s clearly the tag-and-release kind of guy.
Besides, she is pretty sure he owns not a single storage container, and she’s certain that his closet is not color-coded.
Problem is, Cody Garrett finds her rejection an aphrodisiac and pursues her.

EXCERPT:
“Now,” he said, when he surfaced for air, “what the fuck is your problem?”
Before I could answer, he kissed me again, then said, “Don’t answer that. I’m sick of you and your stuck up ways! You’re driving me nuts with your bitching.”
Another kiss, before he spoke again.
“Show me how to act grown up, Bridie. I need your help here. I’m the eldest child in my family and I have a crude sense of entitlement. It’s what gives me confidence to achieve in life, but at the same time, it’s my downfall. It makes me a spoiled son of a bitch, and fuck, I never realized it until now, and baby, I really needed my ass kicked by someone like you.” He kissed me again.
“This ass-kicking, it’s an experience like nothing I have ever felt before. I like it and I hate it. Now, just put your arms around my neck and kiss me like you did before.”
I summoned a glare but when I looked into his blue eyes, my insides turned to mush.
To my disgust, my levelheadedness, my determination to lose him and all Usher’s Burn motivating lyrics did a David Copperfield on me and vanished. Poof!
To my disgust, I put my arms around his neck and matched the intensity of his kisses.
As I kissed him, the bruising inside of me healed and the burning ceased. He was a dose of citrus-flavored antacid to my soul.
“Now, that’s better,” he said between kisses. “Don’t you feel better now that you surrendered to me? Huh? Don’t you? Huh?”
“Shaddup!” I whispered, as I held his face in my hands and kissed him.
“Okay, okay, I’ll shaddup.”
“I don’t wanna be forced into anything,” I said in a meaningful voice.
more
Amazon Other stores
Bookmark  Rate:

'My Brother, My Rival - All out of Love' is tagged as:

The 'My Brother, My Rival' series

Similar books to 'My Brother, My Rival - All out of Love'

More books like 'My Brother, My Rival - All out of Love'   ❯

All books by Eve Rabi  ❯

Buy 'My Brother, My Rival - All out of Love' from the following stores: