A Breach of Promise (The Rules of Engagement #1) 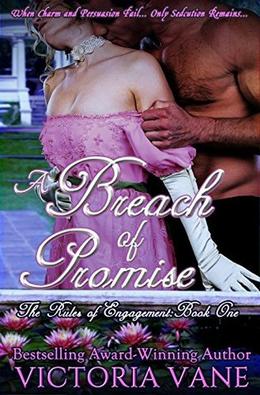 On the night of her betrothal, Lydia Trent receives just a taste of what awaits her in marriage with her fiancé…and then he leaves her wanting. Now, after waiting six years for her exceedingly reluctant bridegroom to honor his troth, Lydia is resolved to break it off.
When Marcus, Lord Russell, receives Lydia’s letter demanding a release from their marriage contract, he is at first stunned, but certain that he’ll have her eating out of his hand with his usual wit and charm. Although confident that he'll repair the damage, he has no clue how determined the headstrong Lydia is to thwart his every effort to win her back.
Yet, Marcus discovers, in spite of her conviction to end the engagement, Lydia is more responsive to his touch than he ever imagined. He just needs to get her alone to unleash the promised passion he sees within his virgin fiancée. Armed with this knowledge, he will use any tool in his arsenal to exploit her weakness.
In short, he’ll just have to ruin her!

'A Breach of Promise' is tagged as:

The 'The Rules of Engagement' series

Similar books to 'A Breach of Promise'

Buy 'A Breach of Promise' from the following stores: