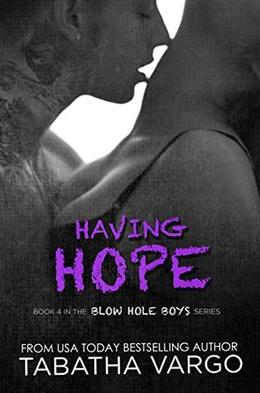 The final installment of the BLOW HOLE series. *A standalone novel

No one’s promised tomorrow. And Chet Rhodes, the drummer of Blow Hole, is all about living for today. Sex, drugs, and rock and roll—anything to help him forget his deadly secret and keep him detached. But when he meets Hope, a bitchy brunette with sarcastic wit and a deadly right hook, his carefully constructed defenses break down. For the first time ever, he wants more than a one night stand, but one night might be all he has left.

Hope Iverson holds a secret that could potentially destroy everything she's built. Hardened with a short fuse, her past has left her emotionally unavailable. That is, until she meets the charismatic drummer for Blow Hole. His smart mouth has the ability to make her smile, and his inked body makes her feel things she’d rather not.
But scars leave you changed, and Hope isn’t sure there’s enough of herself left to give.

In the end, promises will be broken. Lives will be destroyed. And Hope must decide what's most important to her—secrets, love, or life.
more
Amazon Other stores
Bookmark  Rate:

'Having Hope' is tagged as:

Similar books to 'Having Hope'

All books by Tabatha Vargo  ❯

Buy 'Having Hope' from the following stores: