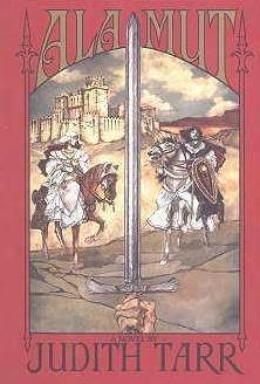 A knight from across the sea, a beleaguered kingdom, a spirit of fire with a deadly secret.

For close to a hundred years the Crusader Kingdom of Jerusalem has stood with its thin line of fortresses against the combined power of the world of Islam. Now the Sultan Saladin has declared war against the young Leper King.

Not all the inhabitants of this embattled country are firmly established on one side or the other. One such family, half Frank, half Saracen, stands on the boundary between the two worlds and faiths.

Into that family comes Prince Aidan, son of a mortal king and an immortal enchantress. He journeys into the East for love of a kinsman and the lure of adventure, and stays for grief and mortal vengeance.

Morgiana is neither human nor mortal. She is the Slave of Alamut: the Master of the Assassins’ most deadly weapon. She knows little of gentleness and nothing of love—until she meets the prince from across the sea. But he has sworn to destroy her.

Set in the world of the award-winning series, The Hound and the Falcon.
more
Amazon Other stores
Bookmark  Rate:

'Alamut' is tagged as:

All books by Judith Tarr  ❯

Buy 'Alamut' from the following stores: