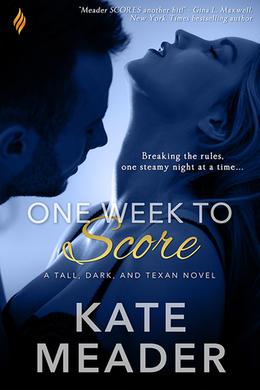 Olivia Kane’s wedding day has just imploded spectacularly. Shots lined up at the bar? Bring it. Hot stranger on the hook? Come on down. What this party does not need is six feet and change of home-grown Texas cockiness in the form of her brother’s best friend, the man who broke her heart seven years ago.

Flynn Cross won’t stand by while Liv finds sensual solace in the arms of a stranger, not when his own hard-for-her body is more than up for the task. For one week, he’ll make her honeymoon-for-one a sizzling party for two.

Breaking the rules, one steamy night at a time . . .

But the taboo they’re breaking is only the beginning . . . and Flynn’s part in Liv’s wedding debacle could bring about their end.
more
Amazon Other stores
Bookmark  Rate:

'One Week to Score' is tagged as:

The 'Tall, Dark, and Texan' series

Similar books to 'One Week to Score'

All books by Kate Meader  ❯

Buy 'One Week to Score' from the following stores: