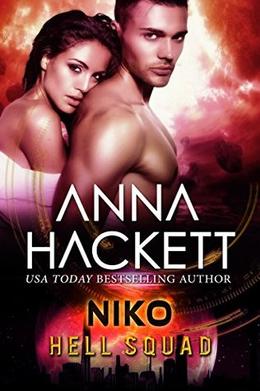 In the aftermath of a deadly alien invasion, a band of survivors fights on…

Mackenna Carides is tough, strong, and excellent at her job as second-in-command of Squad Nine. She often works side by side with Hell Squad on some of the toughest missions to fight back against the alien raptors. Now she’s helping the survivors of Blue Mountain Base settle into their new home at the Enclave. And that means working with the Enclave’s sexy civilian leader, Nikolai Ivanov, an artist who watches her with an intensity that is hard to ignore. A man she’s seen in the field and who she knows is hiding a mysterious past.

Niko is dedicated to the people of the Enclave and to his art. Once, his life was all about death and destruction, now it’s about life and creation—even in the middle of an alien apocalypse. As he welcomes the Enclave’s new members, there is one newcomer he wants to get closer to…but Mackenna is fighting their attraction. As something starts attacking their drones—vital technology for keeping them all safe—Niko realizes that in order to battle this new danger, he’ll have to return to the darkness of his past…and risk Mackenna never looking at him the same way again.

On a dangerous mission to save their drones from the aliens, Niko will need all of his lethal skills and will wade into the fight with Mac by his side. They will be tested to the brink, where nothing is black or white, and they will have to expose themselves and trust each other to fight, live, and love.

Note to readers: This sci fi romance contains a lot of action (think invading aliens and dangerous missions), tough warriors (the battle-hardened soldiers of Hell Squad and Squad Nine) and a steamy romance (lots of sexy times between a sexy, mysterious artist and a tough female soldier). So if you like it fast, and gritty, and sexy, this is for you!

Q & A with the Author

Q - How would you describe the Hell Squad series?
A – Tough, alpha soldiers battling invading aliens. Hell Squad is science fiction romance with a dose of post-apocalyptic grit and a serve of military romance. There is lots of action, adventure and romance. But even in the middle of a fight for survival, the series is focused on hope, friends, family and love. Hell Squad has been one of my bestselling series and I’m thrilled the Hell Squad gang have so many fans.

Q - Why did you want to write the series?
A - I love action, adventure and romance. And I love science fiction romance and all the endless possibilities. I also wanted to write something that was a little darker and grittier than my more adventure-filled series, the Phoenix Adventures. Then I had this image of a former society party girl wearing fatigues squaring off with a scarred, battle-hardened soldier and Hell Squad was born. I’d intended it to be a single story…but the Hell Squad soldiers had other ideas and literally came to life as I wrote the first book!

Q - What order should I read the books in?
A - All the Hell Squad books have stand-alone romances in them but the action arc of the invading aliens grows with each book. Many readers have entered the series with later books and they haven’t been lost, but, characters from the early stories do appear in later books and I really think it adds something to the reading experience to read them in order. Here's the order I suggest: