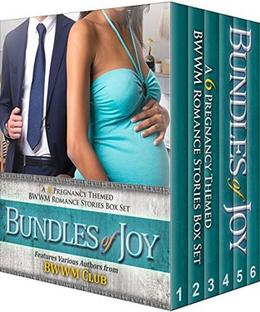 Have you got baby fever?

Are you after a compilation of stories all about the trials and tribulations of planned and accidental pregnancies, surrogates and playboy billionaires?

Then look no further, as this bundle has all of that and more from some of our bestselling authors.

Each book is a complete story - no surprise cliffhangers here!

Will the couples get their happily ever after?

Find out in these emotional yet sexy romances by various BWWM Club authors.

Suitable for over 18s only due to sex scenes so hot, you'll be thinking about making your own babies.

Here are all six books collected into this great value bundle:

The Billionaire’s Diamond Baby - Alia Thomas:
Natalie Johnson’s life couldn’t be more different than it was a few months ago - going from an abusive relationship to owning her own business and being pregnant with billionaire Brett Haughton’s baby is like a dream come true. But drama is always just around the corner, and it’s set its sights right back on Natalie...

Falling For His Surrogate’s Sister - Erica A Davis:
The Slade sisters have fallen on hard times and need money badly, so Michelle Slade decides to sign up as a surrogate for the rich to help get some cash for her and her sister Arlie. However, when the rich billionaire she matches with wants them to move in with him for Michelle’s pregnancy, it may not be Michelle he has an eye on...

Her Asian Billionaire’s Baby - Mary Peart:
Julia Moore is usually a very good girl - she doesn’t drink or party, and she definitely doesn’t sleep with strangers... until she meets David Huang. Then, when she finds out she’s pregnant from the encounter, Julia is faced with a dilemma: does she tell David about the life he helped create, or does she risk having to raise the child all on her own?

Carrying His Baby - Vanessa Brown:
Hallie has just gotten a promotion at work and couldn’t be happier, but her first event as the new manager of her catering company turns into a lot more than she bargained for when she meets playboy billionaire Aldous. After a one-night stand leaves her pregnant with his child, Hallie wonders if keeping the baby is a good idea given Aldous’ reputation, not to mention her career...

Surrogate For The Billionaire - Tyra Small:
Billionaire Bryce knows he has to father a child to eventually take over the empire he’s created, but he feels like he doesn’t have the time for romance. In answer to that, he decides on a surrogate named Lateisha who doesn’t want kids of her own, but he could never have predicted that he’d fall in love with the one person he hired so that he didn’t have to...

The Billionaire’s Hired Baby Mother - Tyra Small:
Melissa and Roy Gardner have an almost perfect life, except for one thing: they can’t have a baby. Meanwhile, Ettie would do anything to make sure her daughter has a good education, including signing up for a surrogacy service as a carrier. It seems like a match made in heaven for Ettie and the Gardners at first, but love and fate have other plans...
more
Amazon Other stores
Bookmark  Rate:

'Bundles Of Joy' is tagged as:

Similar books to 'Bundles Of Joy'

Buy 'Bundles Of Joy' from the following stores: