A Fashionable Indulgence (Society of Gentlemen #1) 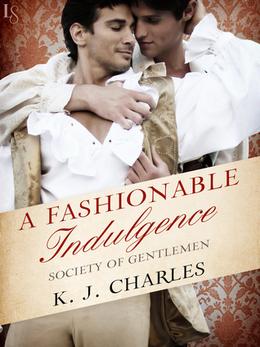 In the first novel of an explosive new series from K. J. Charles, a young gentleman and his elegant mentor fight for love in a world of wealth, power, and manipulation.

When he learns that he could be the heir to an unexpected fortune, Harry Vane rejects his past as a Radical fighting for government reform and sets about wooing his lovely cousin. But his heart is captured instead by the most beautiful, chic man he’s ever met: the dandy tasked with instructing him in the manners and style of the ton . Harry’s new station demands conformity—and yet the one thing he desires is a taste of the wrong pair of lips.

After witnessing firsthand the horrors of Waterloo, Julius Norreys sought refuge behind the luxurious facade of the upper crust. Now he concerns himself exclusively with the cut of his coat and the quality of his boots. And yet his protégé is so unblemished by cynicism that he inspires the first flare of genuine desire Julius has felt in years. He cannot protect Harry from the worst excesses of society. But together they can withstand the high price of passion.

Praise for A Fashionable Indulgence

“If one Regency rake isn’t enough for you, check out A Fashionable Indulgence , a rollicking tale from the deft pen of K. J. Charles. I’ll read anything she writes!” —New York Times bestselling author Kate Pearce

“I will go out on a limb and say I enjoyed this more than the Magpie story. Gasp! Yes I said it.” —Reviews by Jessie Wave

“The kind of story that you want again and again.” —Love Bytes

“A wonderful start to a new series. Harry and Julius are so likable and incredibly sweet together.” —Joyfully Jay

“ A Fashionable Indulgence has more than piqued my interest in all things A Society of Gentlemen has to offer and I am eagerly anticipating future installments. For now, allow me to give this latest 2015 favorite five-plus stars.” —Bookaholics Not-So-Anonymous

“Charles [gives] potential and breadth to an unusual and unconventional couple who are sure to enchant readers.” —I Am, Indeed

“I never, ever wanted it to end.” —Binge on Books

“An utterly fantastic read . . . It hooked me in from the first page and kept me that way until the very end; the story is well developed with plenty of historical detail, all the characters are very strongly drawn, and the two protagonists are captivating and intriguing. In short, I couldn’t put the book down.” —Caz’s Reading Room

“ A Fashionable Indulgence has it all: joy, laughter, excitement, suspense and hand-wringing tension. It was everything I hoped it would be and I’m eager for the next book.” —Prism Book Alliance

“I’m giving A Fashionable Indulgence a wholehearted recommendation. . . . I will definitely be reading the other books in this series as soon as I can get my hands on them.” —All About Romance

“Charles excels at writing m/m stories with plots that extend beyond her main characters’ arc, . . . and A Fashionable Indulgence delivers.” —The Breakfast Ocotopus

Includes a special message from the editor, as well as an excerpt from another Loveswept title.
more
Amazon Other stores
Bookmark  Rate:

'A Fashionable Indulgence' is tagged as:

The 'Society of Gentlemen' series

Similar books to 'A Fashionable Indulgence'

All books by K.J. Charles  ❯

Buy 'A Fashionable Indulgence' from the following stores: