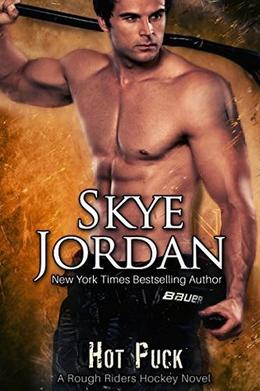 “The intense, tight-knit men of the Rough Riders’ hockey team will win readers over in a heartbeat.” ~Marina Adair, #1 Bestselling Author

The pressure has never been more intense for Rough Riders’ star defenseman Beckett Cross. With his contact expiring, Beckett has to live up to his badass reputation every minute of every game to earn the next big deal. A deal that will secure a stable home for his five-year-old daughter. So when an injury on the ice threatens to send him to the ER, he fights protocol—until the feisty EMT refuses to take no for an answer. Beckett likes his women assertive, and the spark between them is nothing short of scorching. Her indifference to his fame and money only intrigues him more. And by the time he peeks beneath her tightly sealed edges to see her beautiful but deeply wounded soul, he’s in way too deep to pull back.

After years of shutting herself off from men, Eden is tempted by the heat that blazes when she is around the NHL’s most notorious bad boy—even toying with an inkling of “what if”. But life has taught her how painfully that kind of fire burns. And how deeply it scars. So Eden denies the spark room to grow, the same way she shut out the violence from her past, focusing instead on her career and finishing paramedic school. She’ll never rely on a man for money or security again.

But when the spark between them becomes too hot to ignore, one night isn’t enough. Soon, Beckett and Eden find themselves caught between desire and fear—with painful pasts pulling them in one direction and a fragile new love pulling them in another. All while the family and careers that matter most hang in the balance.
more
Amazon Other stores
Bookmark  Rate:

'Hot Puck' is tagged as:

All books by Skye Jordan  ❯