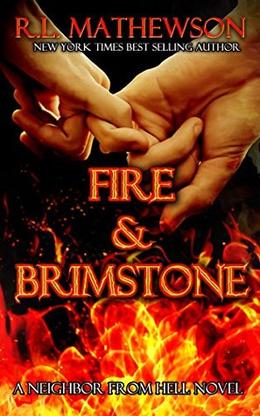 What happens when a Bradford with questionable OCD, a tempter and a reputation for making his employees cry falls for the woman that refuses to accept the fact that he’s fired her and was terrifyingly more of a Bradford than he was?
Well, we can’t share that here, because it would be seriously inappropriate, but we’re sure that you can see where this is leading…
To the altar or a stint in the slammer, either one is possible when it comes to the Neighbor from Hell Series.
Author’s Note: This book along with the rest of the series is intended to make you smile, let you relax and forget the drama and stress that plagues our lives even if its just for a little while. This is a drama free book. My goal is to put a smile on your face and I hope this book does that.

Excerpt from Fire & Brimstone:
“What the hell are you doing?” she asked, going completely still as she told herself that she was imagining this.
“Is it helping?” he demanded instead of explaining why he’d thought that it was a good idea to climb in bed with her and spoon her, wrapping his arms tightly around her and pulling her closer.
“It’s definitely creeping me out!” she snapped, because she couldn’t tell him that it was actually helping her and that some of the pain was subsiding.
“That didn’t answer my questions,” he said, adjusting his hold around her and making the pain bearable.
It didn’t go away, but at least she didn’t feel like she was seconds away from screaming in agony anymore.
When she didn’t answer him, because she stubbornly refused to admit that anything he did was helping, he started to pull his hand away. “I guess if it isn’t helping…” he said, letting his words trail off as he continued to pull his hand away.
Glaring at the wall and hating him for toying with her like this, she grabbed his arm and yanked it back in place. “It’s helping! Are you happy?”
“Overjoyed,” he said with a chuckle that she refused to find pleasing as he wrapped his arms back around her and held her close.

The 'Neighbor from Hell' series

Similar books to 'Fire & Brimstone: A Neighbor from Hell'

More books like 'Fire & Brimstone: A Neighbor from Hell'   ❯

Buy 'Fire & Brimstone: A Neighbor from Hell' from the following stores: