Dragon Blue: A Lie That's True (The Dragonlords of Xandakar #1) 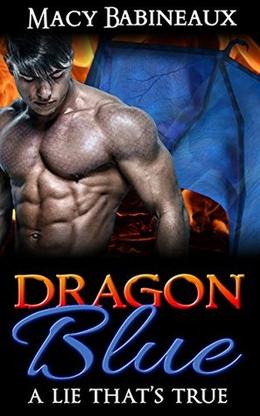 Miranda Betts works as a waitress in a roadside diner in Oklahoma. Her life will change when a mysterious female customer leaves an ornate necklace in lieu of paying her check. Later, alone in her trailer, she tries on the necklace and is transported to a strange land full of people who can shift into other creatures, including fearsome dragons. And everyone thinks she's someone she's not.

Corban Everfrost leads the clan of blue dragons and rules the Icelands after the mysterious disappearance of his father. While investigating the appearance of strange interlopers from another world, his sister informs him that he is to be wed to the daughter of the Wildfire clan who has been in exile on Earth since she was an infant. Corban wants nothing to do with a new bride or the Wildfires. But when he sees the dark, fiery woman brought to his world via a magic necklace, she stirs something within him.

At first, Miranda thinks Corban is a jerk. He thinks she's an outcast from a clan he despises. But soon they will learn each other's secrets, and as they learn to love each other their relationship may be the key to saving all of Xandakar from dark forces from another world.

Dragon Blue is the first book in a planned 5-book series, The Dragonlords of Xandakar. It contains lots of fast-paced action, VERY steamy love scenes, and a happy ending.
more
Amazon Other stores
Bookmark  Rate:

'Dragon Blue: A Lie That's True' is tagged as:

The 'The Dragonlords of Xandakar' series

All books by Macy Babineaux  ❯