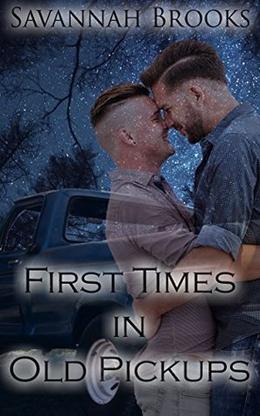 Cody Benson started falling for Jayce Metz the day they were introduced. That was ten months ago.

Since then, Cody’s never uttered a word about the growing feelings he has for Jayce, and Jayce has given no indication that he’s even into guys. Besides that, Cody isn’t out to his family yet either, and with the upcoming wedding of his brother Sean to Jayce’s sister, he’s content to keep his secrets to himself. Especially since they’re all about to become family.

When Sean invites Jayce to join them on their brothers-only, bachelor-party, camping trip, secrets are forcefully revealed, courtesy of his jerk of a brother. Cody's humiliated and storms off, but when Jayce chases after him, Cody discovers that he might have a chance with Jayce after all.
more
Amazon Other stores
Bookmark  Rate:

'First Times in Old Pickups' is tagged as:

Buy 'First Times in Old Pickups' from the following stores: