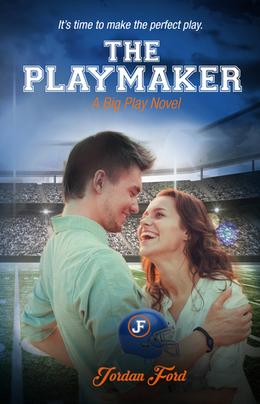 This is it—Tori Lomax’s senior year.
Her last chance to leave Nelson High without a bucketload of regrets.
Number one priority—get Colt Burgess to fall in love with her. So what if he’s the Raider’s number one playmaker? So what if he’s so far out of her league, the idea of them together would rupture the school’s social order?
She has to try, before it’s too late.
She’s come up with the perfect set of plays. All Colt has to do now is buy into them.

Colt Burgess wants one thing: to play football after high school. But his grades are tanking and his dreams of playing college ball are fading…fast. He shouldn’t waste time on Tori Lomax. However, she was a friend back in middle school, and he can’t really ignore her small request for a favor. How hard can it be to get the guy she’s lusting after to notice her?
He’ll help her out, and then he’ll focus on what’s really important: football.
Assuming he can stop thinking about her…
more
Amazon Other stores
Bookmark  Rate:

'The Playmaker' is tagged as:

Similar books to 'The Playmaker'

All books by Jordan Ford  ❯

Buy 'The Playmaker' from the following stores: