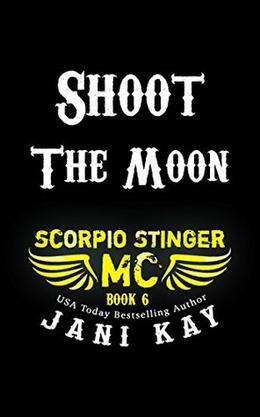 It’s rawer, it’s grittier and downright dirtier than any of the other Scorpio Stinger MC books.
If what’s happened before has shocked and delighted you, get ready to be rocked on a whole new level.
Meet the anti-hero and the spitfire in SHOOT THE MOON.

Shoot the Moon
1. To attempt the near-impossible.
2. To take a risk for great rewards.
3. To set one’s sights high and try for something that one wants badly, but for which realistically the probability of success is not good.

anti-hero
1. Morally ambiguous and flawed hero who is hard and jaded and not entirely pure but has hidden noble intentions.
2. A bad boy with heroic qualities.

spit·fire
[spĭt′fīr′]
1. A person, especially a girl or woman, who is of fiery temper and easily provoked to outbursts.
2. Wild & free. Someone whose angry words sting like fire. Considered strong emotionally & spiritually.
3. Someone who you don't want to be on the bad side of.

SHOOT THE MOON
Razor has some heavy boots to fill. He’s always lived in the shadow of his brothers and he’s sick of it.
Lexi is wild and out of control. She won’t be told what to do and she has a filthy mouth that’s gotten her into more trouble than she can admit.
He wants her from the first moment he lays eyes on her.
She only has eyes for another man she can’t have.
He’s determined to claim her and make her his.
She fights him tooth and nail.

Is Razor the one man who can tame her and make her his?


Warning:
Piercings, tattoos, overload of sex and foul language. Read at your own risk.
more
Amazon Other stores
Bookmark  Rate:

'Shoot The Moon' is tagged as:

Similar books to 'Shoot The Moon'

All books by Jani Kay  ❯

Buy 'Shoot The Moon' from the following stores: