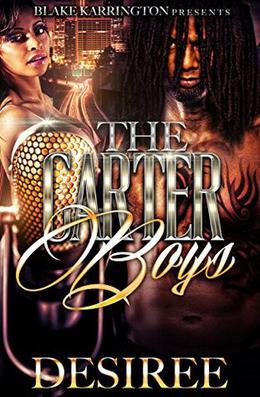 So what happens when a slick mouth educated girl from Brooklyn NY. decides to go off to college in the capital of the south, Atlanta Ga?? She quickly gets introduced to the Atlanta life style where Bruh is said every other word. Dreaded fro’s are a must. Hot lemon pepper wings are law. West side accents are always thicker than the east side. Nobody says ATL unless they’re from out of town. HBCU life is unlike any other. Lastly and most importantly that it's all about family, in particular the Carter Family. Without the Carters? There is no Atlanta.

Drama...Sex...Love...Drugs..and Music are just a few of the Carter Boys daily dealings, when being the largest most dangerous organization the city of Atlanta has ever seen isn’t on their to-do list. The women who want to be with them and the men who want to be just like them can easily get lost in the shuffle when the target is constantly moving to a new Carter’s back.

Eldest brother Shiloh has always kept to himself. Even with seven other siblings, he tends to shy away from the attention since he has the weight of his family secret on his shoulders. Protecting them from their family's dark past has always been his job, even as it starts to become to much for him bare. That is until he meets a beautiful woman who moves next door to him, and shows him that some secrets aren’t always meant to be kept.

Elijah Carter is not only the face of The Carter Boys, but his vocal talents is what has their name ringing bells in the music world. A hot head and a womanizer, Elijah only has time for two things, making sure his family stays feared in the streets and taking down any groupie who will do anything for just one night with him. All of the perks that come along with being a singing sensation and a street legend will have any man living in pure bliss, but when Elijah runs into the quiet, yet ordinary college girl named Jordyn with a “Y” she introduces him to something far greater.

Trent Carter is everything any man could ever hope of being. A brother of Kappa Alpha Psi fraternity, this pretty boy is educated, can have any woman he wants, and is apart of one of the largest crime families in Atlanta. With being pretty much the object of every woman's desire, Trent never has a problem with the opposite sex. Whether its for one night or a short fling, the women that surround him are always ready and willing to make it on his hit list. But what happens when a man who can have any woman he wants, meets a girl who doesn’t even bat an eye in his direction?

The Carters may be a dysfunctional bunch, but they love hard and are willing to do anything to make sure their family stays on top. The only question is, can a strong family on the stage and in the streets hold it together for the love of each other when their secret is brought to light or will their families past ruin everything they’ve worked so hard for?
more
Amazon Other stores
Bookmark  Rate:

The 'The Carter Boys' series

Similar books to 'The Carter Boys'

Buy 'The Carter Boys' from the following stores: