St. Pierre Boyz: All Is Fair in Love and War 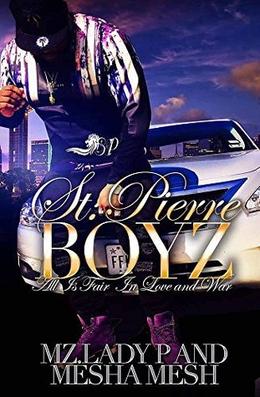 The infamous St.Pierre Boyz; Luxe, Sebastian, and Judah were all heirs to the dangerous St.Pierre Drug Cartel, which originated in Haiti. After their father's untimely death, the Cartel was soon handed over to their ruthless mother Ava, who reigned supreme. With problems arising, she is suddenly forced to disappear for a while leaving her three sons in charge to run the business. Being that they were low key with how they handled things, they moved a lot like their mother, but smarter by staying under the radar.
Ava, not being a traditional parent, instilled in them to take whatever they want, when they want and by any means they deem necessary. For the longest, they ruled the streets with an iron fist, and nothing, or no one, got in their way until they unexpectedly met the loves of their lives. With other women in tow, Ava feels that love is putting a damper on their family business, and she’s not having that, so that’s sends her on her own mission..
Like a tornado, Leilani, Dynasty, and Diamond comes into their lives and sends them on a whirlwind of emotions they never saw coming. For them, loving those powerful men was the easy part. It's the domino effect of trouble that follows behind them, which makes it hard.
What happens when the deck is stacked against you and the thin line between love and lies seem to blur? What do you do when secrets are exposed and you don’t know who to trust? Do you go to war with all you know or do you fold? However you choose, just know that All’s Fair in Love and War when your man is a St. Pierre Boy.
more
Amazon Other stores
Bookmark  Rate:

Similar books to 'St. Pierre Boyz: All Is Fair in Love and War'

More books like 'St. Pierre Boyz: All Is Fair in Love and War'   ❯

Buy 'St. Pierre Boyz: All Is Fair in Love and War' from the following stores: