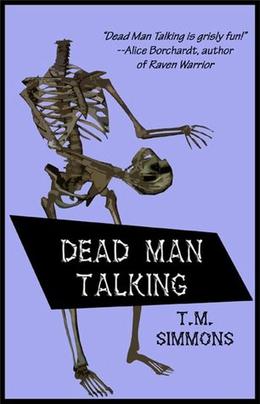 Weird things tend to happen when you live in a haunted house — not that author/ghost hunter Alice Carpenter has a problem disciplining the ten resident ghosts in her lakeside log cabin near forgotten-time Six Gun,, Texas. When her cousin Katy calls looking for help with the resident ghost at Espirt d'Chene, the family mansion near Jefferson, Alice agrees to come to the rescue.

Sir Gary Gavin, dead now over two hundred years, insists Alice is the only one who can expose his undeliberate murder to allow him to leave his tortured existence; and he's not above wreaking havoc at Espirt d'Chene until Alice concedes to his demands. Before Alice can even pack, though, Katy discovers a new murder — a headless corpse floating in her swimming pool. This new ghost — Bucky, the black-sheep son of a Texas senator — is dangerous in his newly-dead, confused state as he searches the plantation for his head.

Alice must somehow uncover the identity of Bucky's murderer, or else it looks like Katy will be charged with the crime, despite several other suspects who have motives for wanting Bucky dead. To make matters worse, the homicide detective in charge, Alice's ex-husband Jack, doesn't believe in ghosts. That leaves Alice no choice but to depend on her ghost hunting mentor, Twila, and her elderly neighbor, Granny, to assist in the investigation.

Katy is arrested, and there's no help for it: Sir Gary's going to have to join the investigation. Much to Jack's dismay — and the delight of the women — he is finally forced to admit that Sir Gary is real. A real ghost, anyway. Together, the unlikely team of sleuths join forces to help send Sir Gary to his deserved reward, track down the real killer, and set Katy free.
more
Amazon Other stores
Bookmark  Rate:

'Dead Man Talking' is tagged as:

All books by T.M. Simmons  ❯