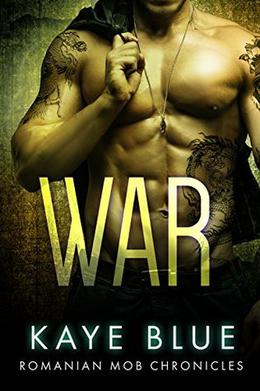 HER:
I should have known better.
Just a wedding, they said. Double my usual pay for a few hours’ work. Easy money.
Easy enough—until the shooting started.
Now I’m on the run with a stranger.  A dangerous, alluring stranger as sexy as he is menacing.
Crazy, right? But not as crazy as me…because I’m not sure I want to get away from him.

HIM:
I should have ditched her.
Bad enough that someone’s after me—someone with the stones to shoot up a mob wedding and enough power to cut me off from all my resources.
But one look in her dark eyes, and I knew I couldn’t leave her behind. Now I have to stop the people who want us both dead—and keep telling myself she’s nothing to me.
Fighting the entire criminal underworld won’t be a walk in the park…but falling for her would be far more dangerous.
more
Amazon Other stores
Bookmark  Rate:

All books by Kaye Blue  ❯

Buy 'War' from the following stores: