Return of the Jerk (Sweet Life in Seattle #2) 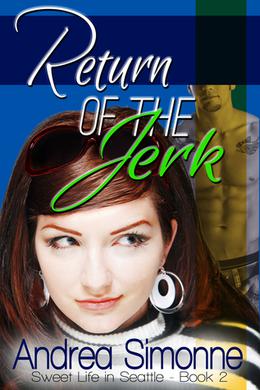 Steamy and fun, an irresistible story of one woman’s obsession and the jerk-like object of her unrequited love...

Wedding cake baker Blair Thomas loves her life. Her business is thriving, her Seattle condo has a great view of the water, and her refurbished ‘65 convertible Mustang “Isadora” is the coolest car ever. She barely even thinks about that jerk she married five years ago. The one who abandoned her after four months of marriage. The one who left a note on her pillow saying, “See you later, babe.”

Seriously, who does that?

So what if she was once obsessively in love with him. He’s her best friend’s older brother and for years he barely even knew she was alive. He never loved her, and he only married her because of a drunken mistake. At least she’s over him.

The only problem is Blair never got around to divorcing him so technically they’re still married. And after five years of traveling the world—Nathan “Road” Church—has finally decided to come home. He arrived on Blair’s doorstep this morning, and now he’s in her bathroom taking a shower. The nerve of him! Oh, and did I mention he’s still hot? Blair doesn’t know what to do.

The jerk has returned.

Warning: Contains one sexy jerk, humorous situations, a heroine with obsessive compulsive disorder, cussing and swearing, steamy love scenes, and references to a part of the male anatomy that doesn’t crow like a rooster – but certainly rises in the early morning
more
Amazon Other stores
Bookmark  Rate:

'Return of the Jerk' is tagged as:

The 'Sweet Life in Seattle' series

Similar books to 'Return of the Jerk'

Buy 'Return of the Jerk' from the following stores: