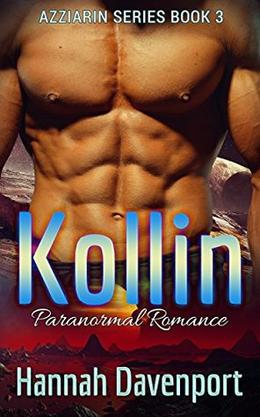 From bestselling author, Hannah Davenport. Kollin, book three can be read as a standalone, but it is strongly suggested that the books be read in order.

Krista and her brother, Alan, escaped to their remote cabin in Tennessee when the Tureis attacked. After months had passed, Krista talked Alan into driving into town. Big mistake! Cars lay abandoned, buildings burned, it was a terrible sight to behold. Just as they tried to turn around and head for home, the Tureis attacked them, killing Alan and kidnapping Krista. What had she done?

Kollin, Commander of the Conqueror, headed for Azziar. After exiting the wormhole, his own males attacked, handing him over to the Tureis. He fumed as he planned his escape, but then one of the Tureis, Loader, changed his plans. The Tureis had started a breeding program, and some female he’d never met now smelled like his mate.

Follow Kollin and Krista as they navigate an impossible situation with the help of a Siccia Princess.
For mature readers only. 34,000+ words.

'Kollin' is tagged as:

All books by Hannah Davenport  ❯

Buy 'Kollin' from the following stores: