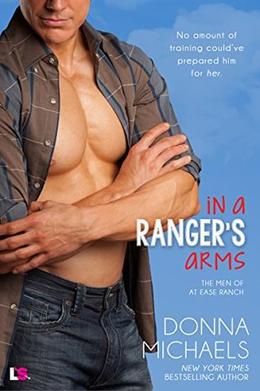 Former Army Ranger Stone Mitchum doesn’t have time for sex. Since starting a company with his brother and two buddies, he’s had more important things on his mind. Like transitioning veterans back into society. But when his curvy new tenant falls into his arms—literally—his libido snaps to attention.

Jovy Larson has four weeks to prove she’s worthy of taking over the family business. Her challenge? Sell gluten-free, vegan food—in the middle of cattle country, Texas. It’s a tough task, but not half as tough as fighting her attraction to her sexy, surly landlord.

Before she knows it, Jovy’s tangling sheets with the hot cowboy, stalked by a jealous cow, and strategizing ways to help Stone’s ranch. But by the time her lease runs out and the test is over, she’s faced with a new challenge…competing against Stone’s sense of duty to win his heart.

The 'The Men of At Ease Ranch' series

Similar books to 'In a Ranger's Arms'

Buy 'In a Ranger's Arms' from the following stores: