The Skills of a Scoundrel (Wardington Park #4) 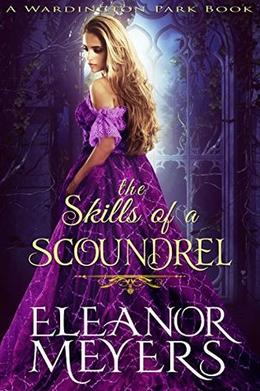 A Man on the Run from Love..

Lord Mark Dawnton is a genius. Everyone says so.
Not only can he think circles around most of his peers, but he has also a skill for maneuvering through his father, the Duke of Wardington’s, marriage schemes.

Mark’s plan: Dodge women of good breeding. Dodge marriage.
The plan had done the Duke of Wardington’s youngest son well for years... that is until the day Mark was presented with a new challenge.

He must instruct a lady in the ways of science and present her to His Majesty by the end of the season as a great mind.
It's a challenge that he can't refuse... but when he meets his lovely student, Mark finds he's up for another challenge entirely.

A Woman on the Run from Herself...

Lady June Haywood is ready to take on any challenge that will get her in Society's good graces once again.
Scandals from her past have made life hard for her, so she's willing to do whatever it takes redeem her reputation.

With June's secret past, the last thing she needs in her life is another man, but Mark is like no man she's ever encountered and very quickly, lessons in chemistry and psychology turn toward anatomy.

He doesn't wish to marry and neither does she, but what will happen when their actions give flame to new scandal?

'The Skills of a Scoundrel' is tagged as:

Similar books to 'The Skills of a Scoundrel'

More books like 'The Skills of a Scoundrel'   ❯

Buy 'The Skills of a Scoundrel' from the following stores: