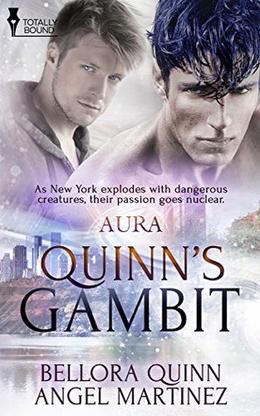 AURA, the Agency of Unnatural Resettlement and Assimilation: it’s a weird job, but somebody’s got to do it.

A magical catastrophe tears the fabric of reality, causing unpredictable holes between worlds through which anything might fall—elves, centaurs, trolls, yeti. The brave officers and employees of AURA struggle daily to help the lost and injured, and contain the irretrievably violent while their research staff scramble to find a way to reverse the effect.

Anything can and does pop through into the human world, sometimes with disastrous and deadly results. It’s a race against time to see if the AURA mages can repair reality and stop the inter-dimensional flood before something crosses over that proves strong enough to destroy the world.


Book One in the AURA series


After a terrible magical accident at Berkeley created unpredictable holes between realities, all manner of non-human creatures started popping into our world. These displacements, called Random Anomalous Reality Events or RARE, have taken magic out of fiction and relocated it firmly in reality, resulting in a great deal of chaos and confusion. Displaced elf Valerian works with AURA, the Agency of Unnatural Resettlement and Assimilation, to intercept these beings as they appear in the human world, helping the peaceful ones and subduing the violent, malevolent ones. It’s good, satisfying work, and Val would be happy if he wasn’t so lonely.

Quinten is a young mage just trying to get by, but New York isn’t the easiest city to make a living in. If his methods are sometimes morally dubious, his heart is still in the right place. Of course, for Quinn, the right place means firmly locked away, protected at all costs. Living by his wits and sometimes magically induced luck, he works as a ‘freelance magic user’, or unregistered mage and small-time con, according to the authorities. The last thing Quinn wants is to draw the cops’ attention, but when an Event happens right on top of him, he’s forced to turn to AURA for help. Valerian isn’t at all what he’d expected in an AURA cop, and he certainly wasn’t expecting to join forces with the sexy elf, a snarky drow and a bitter incubus, when certain individuals in power try to stop the RARE by any means necessary.

Things are not all what they seem at AURA headquarters, and a greater evil lurks at the top than anyone could have imagined.


Angel Martinez
About the Author:
The unlikely black sheep of an ivory tower intellectual family, Angel Martinez has managed to make her way through life reasonably unscathed. Despite a wildly misspent youth, she snagged a degree in English Lit, married once and did it right the first time, (same husband for almost twenty-four years) gave birth to one amazing son, (now in college) and realized at some point that she could get paid for writing.Published since 2006, Angel's cynical heart cloaks a desperate romantic. You'll find drama and humor given equal weight in her writing and don't expect sad endings. Life is sad enough.


Bellora Quinn
About the Author:
Originally hailing from Detroit Michigan, Bellora now resides on the sunny Gulf Coast of Florida where a herd of Dachshunds keeps her
more
Amazon Other stores
Bookmark  Rate:

'Quinn's Gambit' is tagged as:

All books by Angel Martinez  ❯