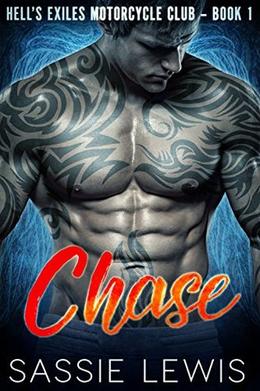 Two things Chase will never walk away from: his club and his woman.

Chase Anderson is a leather wearing, Harley riding, narcissistic bad boy. And the older brother of Vanessa’s best friend. Three years ago, the outlaw biker rode his growling hog out of her life, with a taunt that left her heartbroken, humiliated… and angry as hell.

That day was tattooed into Chase’s mind. Vanessa had been the ultimate curvy temptation. And as a fifteen-year-old goddess, she might have even been worth the jail time. If his father—his Prez—hadn’t sent him away to another chapter, things could’ve been wildly different.

Now Chase is back as the VP of Hell’s Exiles … and Vanessa is finally legal.

Claiming her will be easy. Keeping her safe when war comes at them… that’s a battle he refuses to lose.


Warning: If you’re a fan of bad boy alpha males who take what they want, no questions asked; of feisty, and also slightly bloodthirsty, curvy heroines then Chase is sure to hit all your hotspots.… Oh, and did I mention it’s also May December?

This book is the first in the Hell’s Exiles MC series. With a HEA and no cheating.
more
Amazon Other stores
Bookmark  Rate:

'Chase' is tagged as:

Buy 'Chase' from the following stores: