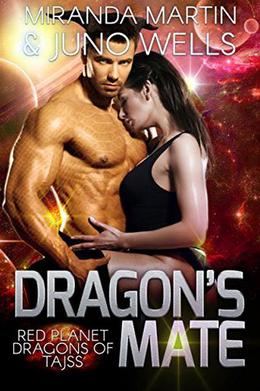 Like being stranded on a desert alien planet wasn't enough...

All I ever wanted was someone to love. Now my best friend is knocked up by the only hunky alien-dragon available and I can't tell anyone how totally jealous I am. The handful of humans who survived our ship's crash are locked in a struggle to live in sweltering heat with dwindling supplies.

The others are taking the life giving, addictive epis but if I take it that means I'm stuck here. Forever. Which also means the chance of being rescued by a knight in shining armor would be zero.

If that weren't enough, I go and get myself kidnapped and he's another big, sexy, alien-dragon warrior.

Dragon's Mate is a full length scifi novel with a happily ever after ending, plenty of steam, bloody battles and alien-human intrigue. It is standalone and co-written by newcomer Miranda Martin and one of the hottest science fiction romance authors out there, Juno Wells.

DRAGON'S MATE is a sequel to DRAGON'S BABY. You do not have to read both in order to understand the plot, but the story will be richer if you do!
more
Amazon Other stores
Bookmark  Rate:

'Dragon's Mate' is tagged as:

All books by Miranda Martin  ❯