Your Planet or Mine? (Otherworldly Men #1) 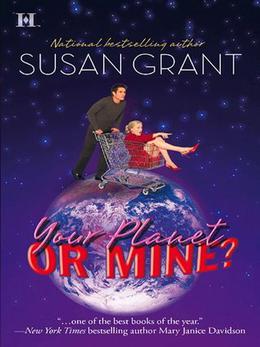 With outrageously false accusations piling up against her famous political family and an ex-fiancé in hot water determined to take her down with him, the last thing Jana Jasper needs is more trouble — especially man trouble. But when she heads to the grocery store for an ice cream fix, not only does the muscled hunk in the frozen foods section ranting about spaceships and invasions look crazy, he looks…familiar.

Cavin of Far Star has never forgotten the girl he met during his weeks spent on that quaint little world, planet Earth, the girl who didn't believe he was real. And now he'll risk his future to save her. All she has to do is take him to her leader. Simple enough plan — although Jana isn't so easily convinced. Hell-bent on charming his way past her defenses, he's determined to stay one step ahead of the galaxy's most feared assassin — and may just capture his favorite Earthling's heart in the process.

'Your Planet or Mine?' is tagged as:

Similar books to 'Your Planet or Mine?'

All books by Susan Grant  ❯

Buy 'Your Planet or Mine?' from the following stores: