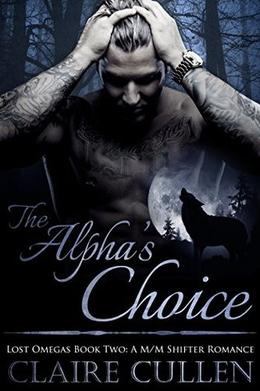 Half a century after the last Omega died, a new generation has been born.

When Pack Enforcer Ben hunts down a rogue Alpha killing humans, he finds the rogue was mated to an Omega, Adam. Taking charge of Adam in order to discover if he was complicit in his Alpha's crimes, Ben just knows he'll be trouble.

Adam, locked away for most of his life and raised to be a subservient Omega, struggles to deal with the consequences of his broken bond. Shown a glimpse of what life could be like free from his vicious mate, he sets his sights on gruff Ben as his new Alpha. Ben, in turn, begins to see beyond first impressions to the fragile Omega left at the mercy of a twisted rogue.

But when the Pack that ousted Ben claims Adam for themselves, they are forced apart, Ben realizing too late the depth of their connection. He has to make a choice; forget about Adam or give up everything to rescue him and keep him safe.

The Alpha's Choice is a 43,000-word romance novella with a happy ending and no cliffhangers. It touches on some difficult themes and includes some language and intimate scenes not suitable for readers under 18.

Though characters from book one, The Alpha's Touch, make an appearance in this story, The Alpha's Choice can be enjoyed as a standalone.
more
Amazon Other stores
Bookmark  Rate:

'The Alpha's Choice' is tagged as:

Similar books to 'The Alpha's Choice'

All books by Claire Cullen  ❯

Buy 'The Alpha's Choice' from the following stores: