Red (Tales of the Were: Redstone Clan #2) 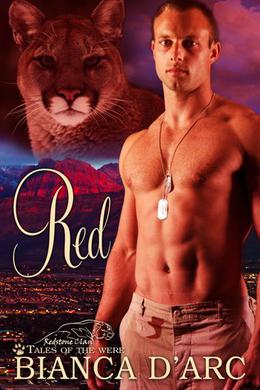 A water nymph and a were-cougar meet in a bar fight… No joke.

Steve Redstone agrees to keep an eye on his friend's little sister while she's partying in Las Vegas. He's happy to do the favor for an old Army buddy. What he doesn't expect is the wild woman who heats his blood and attracts too much attention from Others in the area.

Steve ends up defending her honor, breaking his cover and seducing the woman all within hours of meeting her, but he's helpless to resist her. She is his mate and that startling fact is going to open up a whole can of worms with her, her brother and the rest of the Redstone Clan.

Trisha’s had to hide her special abilities most of her life, but with her brother’s Army buddy – the guy they call Red – she’s finally free to be herself. He calls to her in a way she’s never experienced before and while bad guys keep trying to abduct her, he’s her safe port in the storm. But can such dangerous beginnings lead to a life-long love?
more
Amazon Other stores
Bookmark  Rate:

The 'Tales of the Were: Redstone Clan' series

All books by Bianca D'Arc  ❯

Buy 'Red' from the following stores: