Waste of Worth (DeLuca Duet #1) 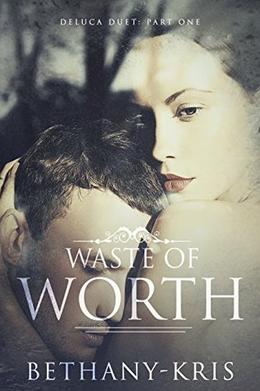 Ask anyone and they will all say the same thing about just who Dino DeLuca is. A criminal, the son of a traitor, and a mafia Capo who can’t be trusted. His past has shaped his life, creating demons he can’t escape from that live in his mind day and night.

He is all too aware of just how people see him.

He doesn’t care—keeping people out means no one can get close enough to hurt him again, and he already has one too many monsters with their claws stuck in his back that he’s still fighting off. His walls are so high, no one is climbing over them. Or so he thinks …

Karen came into his life like a spring shower, her light shining through the darkness and making him see something other than the hell that surrounded him for so long. She doesn’t know who he is or what he has done to become the man he is today. If he can help it, she’ll never know, and his monsters will never hurt her.

She sees his differences as beauty.
She never asks for more.
She is perfect.

The problem with happiness for Dino DeLuca is that his monsters don’t mind taking away what makes him happy. After all, what isn’t given cannot be kept.

These lessons will be the hardest he has ever learned.


AUTHOR’S NOTE: The DeLuca Duet is a two book tale following the same couple through their journey. It is a standalone Duet that can be read independently with a HEA ending.
more
Amazon Other stores
Bookmark  Rate:

'Waste of Worth' is tagged as:

Similar books to 'Waste of Worth'

All books by Bethany-Kris  ❯

Buy 'Waste of Worth' from the following stores: