A Hero to Keep (Hawkins Family #1) 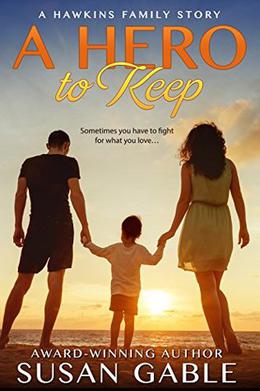 Somtimes you have to fight for what - for who - you love.


Shannon Vanderhoff’s childhood taught her early on that nothing was hers to keep, not clothes, or toys, or even people. So she lives, loves, and lets go. She’s not looking for a hero.


But with custody of her traumatized six-year-old nephew on the line, she needs help. Charming Greg Hawkins, a comic book artist and art therapist insists he can coax Ryan into speaking again, enabling the boy to reveal what he saw the night of his mother’s death at his father’s hands. And though Shannon’s skeptical of Greg’s methods, there’s no denying that he brings light and color to their lives.


Greg, one of twelve siblings, knows anything worth having is worth fighting for. If anyone can prepare Shannon for the upcoming battle, it’s Greg and his family.


But will she fight to keep him, too?


A Hero to Keep is a contemporary family drama romance set near Lake Erie, featuring the Hawkins Family. Grab your copy today!


With close to a half million copies of her books sold worldwide, award-winning author Susan Gable is known for her ability to weave realistic characters and powerful emotions, to make readers both laugh and cry.


***This book was originally published under the title A Kid to the Rescue.***

'A Hero to Keep' is tagged as:

Similar books to 'A Hero to Keep'

All books by Susan Gable  ❯

Buy 'A Hero to Keep' from the following stores: