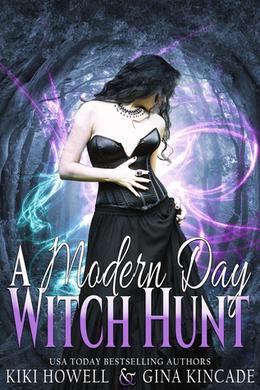 Kamillia, an author of paranormal romance who lives in Salem, Ohio, is accused of being an actual witch by an ambitious group of businessmen with a dark agenda. A man who resembles one of her fictional characters, an alpha male hero, randomly appears at her door offering her protection.

Luca is an immortal Watcher from the River of Light. Sent to Earth to help Kamillia, whose true heritage has yet to be revealed to her, Luca is caught off guard by the fighting spirit of the woman and the way his human body betrays him while in her presence.

When Kamillia is attacked, and all the lies she’s been told come to light, she and Luca are forced to join together. Despite numerous obstacles they need to overcome the evil of many centuries blocking a portal under a mysterious church on the edge of town.

On Halloween night, she will have to face her past—as in a past life—in a big way. Only then can she return to what is left of her life, with or without this stranger who has captured her heart but cannot share her future.

***This is a heavily revised, extended, second edition of a previously published work. While the title remains the same, the authors, and publisher have changed.
more
Amazon Other stores
Bookmark  Rate:

'A Modern Day Witch Hunt' is tagged as:

Buy 'A Modern Day Witch Hunt' from the following stores: