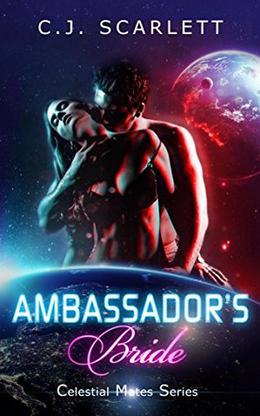 In a dystopian future where humans have foolishly squandered Earth’s natural resources, the few remaining people are becoming desperate. Crowded in huge underground cities, they’ve finally come to the end of the line and they must decide whether or not they will trade the only valuable resource Earth has left... Women.

Being the daughter of a wealthy diplomat, Rose is blissfully ignorant of how the less fortunate live. Desperate to escape to a planet where she can enjoy the sun on her face and swim in clear unpolluted oceans, she vows to make herself the first bride to be mated to off-worlders.

When the Krylon delegation arrives, she realizes that in addition to being good stewards of their planet, eager for female companionship, and polite to a fault, the Krylon males are also drop dead gorgeous. Unfortunately, Earth’s population is vehemently opposed to the galactic mate’s treaty... will Rose and her soon to be Hot Alien Husband be able to make their escape from Earth?
more
Amazon Other stores
Bookmark  Rate:

'Ambassador's Bride' is tagged as:

All books by C.J. Scarlett  ❯