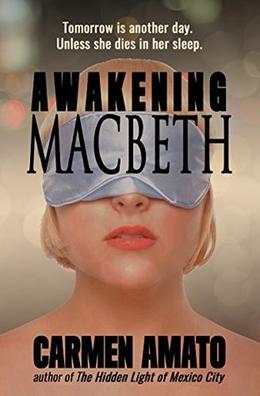 Do you believe the eyes are the windows of the soul?

You will after reading AWAKENING MACBETH, a romantic suspense novel with a paranormal twist sure to keep you up all night.

University of Virginia professor Brodie Macbeth is shattered when her father, a noted historian, kills himself by jumping out of a hotel window hours before delivering a lecture at Harvard.

Nothing about his death makes sense, including his strange will.

Brodie must read his collection of British history books and use the license plates from his car or else forfeit the inheritance that will make her rich. Confused and shocked, she signs on the dotted line.

When Brodie reads his father's books, she begins to have terrifying nightmares. In her sleep, someone with corroded eyes threatens to kill her unless she tells them her father's secret.

But if her father had a secret, he never told his daughter.

Hoping for answers to her father's suicide, Brodie flies to Scotland to see her aunt. The man in the first class seat next to her is Joe Birnam, a military hero and decorated Iraq War vet who lost a leg and a best friend in combat. He's a strong man who won't accept anything less than Brodie's full commitment, but Joe has his own demons to deal with.

As Brodie and Joe fall in love, she discovers the truth about the nightmares.They're a real and deadly contest.

But Brodie doesn't know how to play, let alone win.

Would you?
more
Amazon Other stores
Bookmark  Rate:

'Awakening Macbeth' is tagged as: