In The Cards: M/M Gay Romance 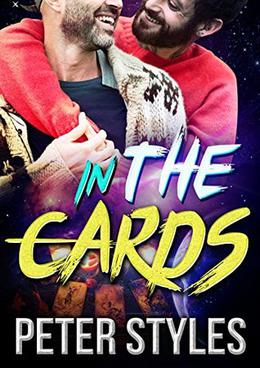 Al is a hard-nosed scientist who spends just about all of his time either at school or hanging out with his hippy aunt. To most people, he seemed boring, or even just a little unusual: he loves sharks, deep sea creatures, and teaching at the university where he is getting is doctorate in biology. No one would ever guess that, behind closed doors, he’s sleeping with his incredibly handsome – and incredibly married – adviser, Hugh.

Al is content to sail through life working hard on his studies and waiting for his studly boyfriend to finally leave his husband, but when he meets a smart, equally dedicated professor who happens to love reading tarot cards and spiritualism, he starts to doubt his plans – and his boyfriend. Between dealing with his aunt’s eccentricities, his growing feelings for Finn, and his fears about whether or not his boyfriend is as dedicated to their relationship as he is, his plate is already full. When a deck of tarot cards and a dead frilled shark are added to the pile, it creates a giant headache for Al and everyone around him.

This book is not suitable for anyone under the age of 18. It is approximately 50,000 words has a happy ending and does not end in a cliffhanger.
more
Amazon Other stores
Bookmark  Rate:

Similar books to 'In The Cards: M/M Gay Romance'

More books like 'In The Cards: M/M Gay Romance'   ❯

All books by Peter Styles  ❯

Buy 'In The Cards: M/M Gay Romance' from the following stores: