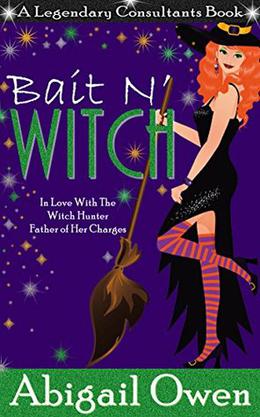 In love with the witch hunter father of her charges...

Rowan McAuliffe has been hiding most of her life. Secretly trained in her powers by an unusual source, she’d been taught not to trust anyone. Especially other witches. However, after she was forced to perform a hateful act against her will, she now hides from the Mage High Council who seek answers, and possibly her life.

Greyson Masters is the Council’s best enforcer–a witch hunter who lays down the law. Despite the danger of his job, Greyson is also raising his triplet daughters. Alone. Budding new witches who display an alarming combined power no one understands. Too bad he hasn’t got a clue how to deal with them.

Little does Greyson realize that the new nanny sent to him by Legendary Consultants is the very witch he is hunting. When the truth is revealed, can these two opposing forces find a way to listen to their hearts? Or will Greyson have to follow orders and kill Rowan–the one woman who has made his soul come alive?
more
Amazon Other stores
Bookmark  Rate:

All books by Abigail Owen  ❯