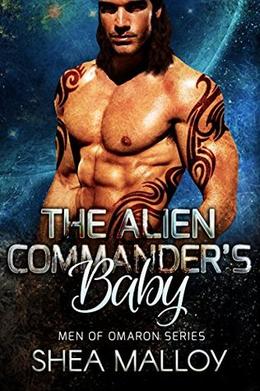 In search of me, I found you.

Impulsive is Karen Landay's middle name. Sometimes there are perks to leaping first and asking questions later. Sometimes that leap can land you pregnant for a rude as hell alien commander.

She should hate Kess Reihan. He's ungrateful, he's arrogant, and he's overbearing. He's exactly the sort of man she's hardened her heart against. But in dangerous moments, he's her protector. His violet eyes burns her from the inside out, his scorching touch obliterates her common sense.

Kess has only allowed himself one course in life: finding his brother's murderer. He has no time or patience for love, let alone fatherhood. But when the human woman with the brilliant blue eyes charges into his life, he questions his goals.

Karen tempts him beyond reason, her soft flesh and sweet, selfless nature irresistible. Even though Kess knows he shouldn't have her, he can never let her go.

The Alien Commander's Baby is a steamy standalone sci-fi romance based in the Omaron World. It is also the last book in the series.

Books in the Men of Omaron series:
The Alien King's Baby (Megan and Mikaal)
The Alien General's Baby (Jillian and Jonnar)
The Alien Commander's Baby (Karen and Kess)

These books can be read on their own, but it improves the experience if they're read in order.
more
Amazon Other stores
Bookmark  Rate:

'The Alien Commander's Baby: Sci-fi Alien Romance' is tagged as:

The 'Men of Omaron' series

All books by Shea Malloy  ❯