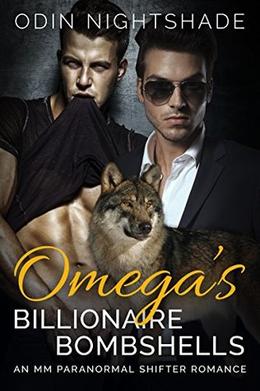 Indulge in your most animalistic desires with this red-hot collection of male on male paranormal mpreg romance!

Omega's Alpha in Waiting
At twenty-eight, James Warrington, only son and heir to Warrington Ltd—a billion-dollar dynasty of oil-freighters—feels like his life's course is set. But in order to take over the leadership, he needs to be a proven Alpha: mated and sire to the next Warrington leader.

Initially not wanting to settle down, James meets Stewart; devastatingly good-looking, charming and aloof, Stewart is everything James never knew he wanted—except that he seems to have something against James and everything he stands for.

What can James, desperately desiring Stewart's love, do? And how can he gain Stewart's affections long enough to create a lasting relationship and sire his heir?

Omega's Spies and Lies
Luke Wyatt, handsome and wealthy suitcase entrepreneur and shifter, is about to close the deal of a lifetime. Travelling to Monaco to meet with the rich and famous, he finds himself rubbing shoulders with the perfect investors in an ideal setting. But before he knows it, things get dangerous. Very dangerous.

Meeting cool, calm and ultra-wealthy Travis Larkin, an Irish businessman and real alpha male, seemed to be the perfect opportunity. But death threats and shootings see Luke plunged into a shady underworld he had no idea existed, and where he has no idea how to survive. His only companion in this world is Travis, who may yet turn out to be far more than he seems.

Omega Tempted by the Billionaire
Matt Cullam is a journalist—one of the best. When his longtime friend Hillary, lately married into a billionaire family, invites him to her new countryside home for a mini-vacation, Matt accepts gladly.

But when Mattt arrives, he finds that Hillary needs his help. Unfortunately for Matt, helping her will involve close work with Hillary's new brother-in-law: the remote, difficult and commanding owner of the company, Drew Matherson.

Will sexy alpha and omega manage to overcome their differences? And what will happen when the initial repulsion between Matt and Drew starts to blossom into something completely different?

This is a collection of stand alone stories with HEAs and no cliffhangers.

AUTHOR'S NOTE: This books contains mature language and explicit content, including male breeding and knotting, and is intended for audiences over 18 years of age.
more
Amazon Other stores
Bookmark  Rate:

'Omega's Billionaire Bombshells' is tagged as:

All books by Odin Nightshade  ❯