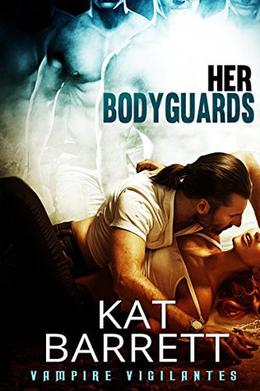 Ash and Grey have settled into their new lives as cave dwellers in the most coveted safe house. They have formed an amiable union with the high vampire Drake, the werewolf Ax, and Orla the fairy.

Things, however are not as perfect as they seem. Ash’s blood has made her oddly human-like and speculation about the values of it abound. One attempt has already been made on her life and others are plotting against her.

When Drake lies to the High Five to try and protect her, his indiscretion backfires in his face.

His lie brings the High Five to their caves and two male bodyguards are sent to protect Ash.

The two new additions are sexy as hell, but Alder and Blue have desires of their own. They are tired of working for the High Five, and want to look after Ash’s body outside of what their position mandates.
more
Amazon Other stores
Bookmark  Rate:

'Her Bodyguards' is tagged as:

Similar books to 'Her Bodyguards'

All books by Kat Barrett  ❯

Buy 'Her Bodyguards' from the following stores: