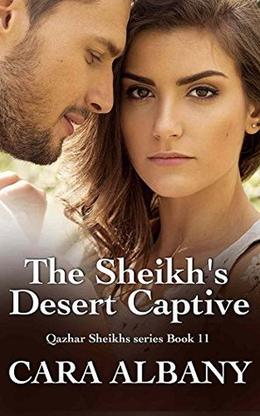 Seven Nights Of Temptation In The Sheikh's Desert Palace
Feisty and independent, Nicole Summers finds the temptations of the desert lead her into a trap, with a potential marriage to a man she can't stand as her ultimate fate.

Dominant and strong-willed, Sheikh Rashid refuses to allow Nicole to be claimed by another man. He won't let that happen. So he rescues Nicole and takes her to the safety of his desert palace.

But there's a catch.

Nicole must spend seven nights in Rashid's palace if she is to escape the fate that was planned for her.

But, now that she has agreed to stay with him, she's realized her problems have only just begun. Because Sheikh Rashid has ignited a powerful desire in Nicole.
And it's clear that Rashid is struggling to resist the temptation caused by keeping a beautiful American safe in his palace.

Can these two, thrust together by destiny, break down the barriers that stand between them and seize their future together?

This is the second in a trilogy of full length standalone novels about three sisters who each find love with their own Qazhar sheikh.

'The Sheikh's Desert Captive' is tagged as:

All books by Cara Albany  ❯

Buy 'The Sheikh's Desert Captive' from the following stores: