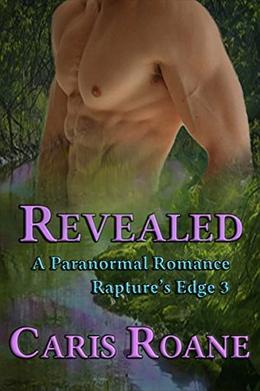 Do you love intense paranormal romance with strong characters battling impossible odds? How about alpha warrior vampires who fall for worthy women? Then you will enjoy REVEALED, A Paranormal Romance and the third installment of the Rapture’s Edge Series. The Rapture’s Edge series is part of the Guardians of Ascension series featuring Endelle and the Warriors of the Blood. In Rapture’s Edge, Warrior Duncan, along with Luken and Endelle, lead a team to Third Earth to save all six dimensions from a powerful, determined enemy. Here’s a brief look at REVEALED, A Paranormal Romance:

He’s a warrior deep in his bones, but all she ever wanted was peace…

As Duncan battles the dangerous death vampires at night, during the day he fights an even greater monster: He can’t believe he’s worthy of the woman he loves. From the time he can remember, his father told him lies about the mother who abandoned him when he was a child. Memories of the night she left, and the cruelty of his father, live like a viper in his gut. Now, when Rachel draws close, he builds walls and pushes her away. Yet how can he live without her? As the enemy on Third Earth attacks, he’s forced to choose between life and death. In the end, only Rachel can save him, but will he let her?

Rachel hasn’t told Duncan about the baby. How can she? Serving as a Fourth Earth shield to the black ops team on Third Earth has her frightened out of her mind. She never wanted be a warrior and now, with a child of her own to think of, to provide for and to keep safe, she longs to return to her simple cottage life. She loves Duncan, but she can’t live in his world. Yet, how can she abandon him when he holds her heart in the palm of his hands?

REVEALED, A Paranormal Romance is a passionate, tender romance set in the Guardians of Ascension world. REVEALED follows AWAKENING and VEILED. All three books are part of the Rapture’s Edge series.

About the Author: Caris Roane is the New York Times bestselling author of thirty-six paranormal romances. She loves her desert garden, especially the birds and lizards who like to hang out. But she encourages the scorpions to inhabit elsewhere! Caris’s motto: Live the fang!

Do you love giveaways? Caris offers lots of goodies to her newsletter subscribers. Be sure to sign up for her mailing list by going to her website homepage. Just copy and paste this link into your browser: http://bit.ly/1JCmHAK

So, are you ready for some steamy vampire love? Just scroll back up and grab a copy of REVEALED today!

'Revealed: A Paranormal Romance' is tagged as:

All books by Caris Roane  ❯

Buy 'Revealed: A Paranormal Romance' from the following stores: