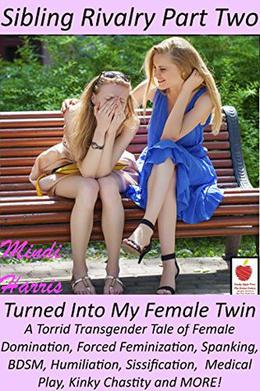 This 9,000+ word book is the Second of a sexy, exciting new gender-bending series. The next installment will be published within the next few weeks, and the conclusion will follow soon after. I promise I won't leave you hanging! Make sure you read part one first.

Excerpts: Gwendolyn said, “It is none of my business, but surely, she cannot be that big a thorn in your side. After all, she is your sister and probably only wants the best for you. It makes me sad to see a brother and sister in conflict. What has she done to you to make you so upset?”

“Yes, well you don’t know her,” Stephen snapped, “She’s been jealous of me all my life. Trying to overshadow me, outdo me. She was a cheerleader and I was on the basketball team, but she beat me in basketball one time, just one time! And I never heard the end of it. She kept saying she should be on the boys’ basketball team and I should be the pompom girl. Can you believe it?” Stephen asked, still shocked that his sister would say that in front of the other cheerleaders, and laugh at him with them.

Gwendolyn waited a moment for Stephen to end his rant and said, “Anyway, if you would please get naked, we need to get you hooked up to the monitoring systems in order to insure optimum results. While you are doing that, I will prepare the bed for you.”

Stephen found something about Gwen’s cold reaction odd. All of this began to make him feel nervous, and with the reawakened memories of the intense humiliation orchestrated by his sister, he felt reluctant to get undressed in front of an attractive woman.
“Monitoring?” he asked, “This seems like a lot of complications for just confidence therapy?”

Worst of all, the cheer coach insisted that Stephen wear the exact same cheer uniform that the girls wore: a red and white crop top and matching short skirt, with the sports bra and spankies.

Stephanie “generously” handed her cute little cheerleading uniform to him at the first pep rally before the first game—in front of everyone. He had to give her his rightful basketball uniform, and join the cheer girls in the girls’ locker room. Then, he had to let them make him over as a cheer girl.

Stephanie took his place in the game, even as he was made to dance and shake his pompoms on the sidelines. He had to go along with their performance as they shook their pompoms and shimmied suggestively in their short skirts and tight midriff tops. At least the school didn’t hold him to serving as the homecoming queen even after Stephanie campaigned successfully for his coronation. He escaped that particular emasculating shame, but he still had nightmares about that!
more
Amazon Other stores
Bookmark  Rate: