Love Historicals presents Once Upon A Kiss 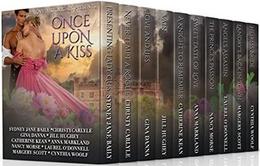 10 fantastic historical romances from USA Today and Amazon Bestselling authors. Stories from Roman times to the Old West all in one box set. Something for every taste all in one place. This set includes -

PRESENTING LADY GUS by Sydney Jane Baily -
Augusta Brenville needs a wealthy husband to save her beloved estate, a seemingly impossible task when her suitors keep dying. Until a seasoned captain arrives, a tad uncivilized for her liking but alive and willing. Can Rolf thwart an assassin with a penchant for poison, fire, and arrows, keeping himself and Augusta alive until their wedding day?

NEVER TEMPT A ROGUE by Christy Carlyle -
An infamous rogue meets his match in a feisty chaperone who has all but given up on love.

LOVE AND LIES by Gina Danna -
Ganius the gladiator can be freed by Aurelia, his Roman mistress, if he takes her with him. If he does it’ll mean his death, but to leave her will destroy her. He must choose—and this is a fight the champion of the sands might lose...

VAIN by Jill Hughey –
A tailor’s abandoned daughter fashions a vain nobleman’s tunic, finding passion between the neckline and hem as misfortune forces her into his precarious aristocratic world.

A KNIGHT TO REMEMBER by Catherine Kean -
When widowed Lady Aislinn Locksmeade finds a naked, unconscious man in the forest, she wonders if he's Hugh Brigonne, her first and only true love. When he wakes, he can't remember who he is or what happened to him. Does she dare to love the roguish stranger, or is there far greater danger to Aislinn than risking her heart?

SWEET TASTE OF LOVE by Anna Markland –
Riddled with guilt after the drowning deaths of his parents, Aidan FitzRam becomes a monk.

Nolana Kyncade is a Scot fleeing the tyranny of a cruel stepfather who intends to marry her to an older man. She bumps into Aidan selling the abbey's mead at a market. He quickly realizes he is not cut out to be a monk.

THE PRINCE’S PASSION by Nancy Morse -
From the blood-soaked sands of the Spanish bullring to the English countryside, from the war-ravaged Crimea to glittering St. Petersburg, Alana follows her heart into the arms of the handsome Russian prince whose secrets can topple an empire.

ANGEL’S ASSASSIN by Laurel O’Donnell -
Damien is an assassin, a man with a tortured past. Sold into slavery, he is trained to kill. Lady Aurora of Acquitaine is the epitome of purity and goodness. When Damien enters Aurora's life, tempting her with promises of forbidden lust, he threatens to tear her peaceful world apart.

LANDRY’S BACK IN TOWN by Margery Scott -
Ex-convict Landry Mitchell no longer hopes for acceptance and forgiveness. Olivia Harding is determined to help him rebuild his life. As their feelings for each other grow, Landry starts to believe in the possibility of a future together … until trouble comes back to town.

HEIRESS BRIDE by Cynthia Woolf -
Both are scarred. Only together can they find the healing that each needs.
more
Amazon Other stores
Bookmark  Rate:

'Love Historicals presents Once Upon A Kiss' is tagged as:

Similar books to 'Love Historicals presents Once Upon A Kiss'

More books like 'Love Historicals presents Once Upon A Kiss'   ❯

Buy 'Love Historicals presents Once Upon A Kiss' from the following stores: