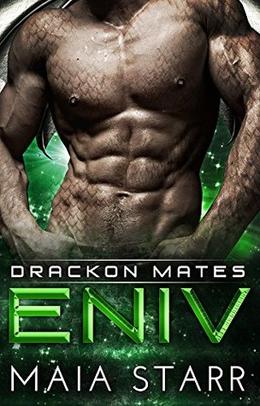 Eniv must find his fiancé, with a sexy detective. Now he might lose them both…

Detective Melinda Katiama has finally received the promotion of a lifetime to the
Intergalactic Special Forces Agency. But her first case forces her to partner with a
Drackonian alien weredragon in the search to find his missing bride to be. She is
furious that she has to partner with such an arrogant rogue, but even more so that
her body is betraying her every time he is near. He is already promised to another,
and not just anyone, he is promised to the very woman they have been assigned to
rescue.

Commander Eniv Handor is an intelligent agent in the Drackonian battalion. His
father has matched him with a diplomat’s daughter from Earth, it is important for
his career. But when he shows up to fetch his bride he finds that she has gone
missing, along with five other brides. He discovers that brides have gone missing
before and the whole thing reeks of a cover-up. Now he is on a mission in space to
find the diplomat’s daughter, but he’s not alone. He is with a feisty Latina detective
that is unlike any female he has ever known, and her scent drives him wild. How can
he fight giving into his temptations when she is so near, and his
guilt of betraying his fiancé is so strong?

When they crack the case and find themselves in the heart of an outlaw planet, the
threat of battle looms near, and Eniv and Melinda must solve the case, rescue the
missing women, and keep their feelings from destroying it all.

Eniv (Drackon Mates) is the fourth book in the Drackon Mates
Standalone series. All books in this page-turning SciFi Dragon
Shifter Romance can be read as standalones, there are no
cliffhangers, and happily ever afters are guaranteed!

All books by Maia Starr  ❯