Rough Around the Edges (Tales from the Edge #5) 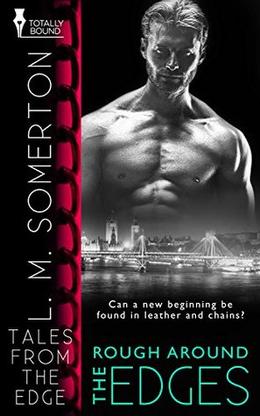 Tales from The Edge series:

The Edge is a training company with a difference. Its weekend clients come for classes in bondage and domination, not team building and problem solving.

The management, staff and customers of The Edge do not lead boring lives. In fact they have a habit of getting themselves into all kinds of trouble. Put Dominant, possessive alpha males together with bratty, loveable submissives and sparks are bound to fly. These Tales from The Edge are their stories.


Rough Around the Edges by L.M. Somerton


Book Five in the Tales from The Edge series


Can a new beginning be found in leather and chains?

The old saying that you can choose your friends but not your family is proved horribly true for Kai, as the mysteries of his past are revealed. As he and Harry start out on their journey together, they must contend with bullets as well as bondage, danger alongside domination, and it’s not easy to establish trust when the whole world is going to hell.


L.M. Somerton
About the Author:
Lucinda lives in a small village in the English countryside, surrounded by rolling hills, cows and sheep. She started writing to fill time between jobs and is now firmly and unashamedly addicted.

'Rough Around the Edges' is tagged as:

The 'Tales from the Edge' series

Similar books to 'Rough Around the Edges'

All books by L.M. Somerton  ❯

Buy 'Rough Around the Edges' from the following stores: