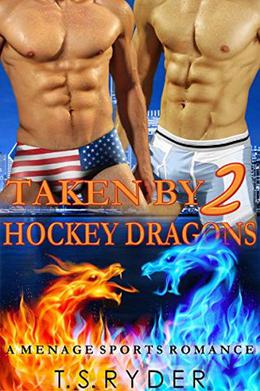 A curvy lawyer with a secret crush PLUS a hot hockey star who is a Dragon Shifter PLUS his sexy buddy who is need of a mate!

Michelle Handsworth loves to flirt with her famous hockey playing client Cain Samson. With his blond hair and blue eyes, Cain is the handsomest man she has ever met, but innocent flirting is as far as they could go. As his attorney, nothing can ever happen between the two of them.

At least, that is the excuse Michelle gives every time Cain asks her out, but it isn’t the whole truth. The real reason Michelle is determined to keep distance between her and Cain is because she can sense a dark and strong magic within him.

Michelle isn’t just a fantastic lawyer, she’s also a witch who can sense people’s auras. She’s always been able to do it and over the years she’s learned to trust her abilities when they give her a warning. Cain’s aura, with its flickering yellows and reds and constant smell of smoke, is a huge warning.

Michelle thought Cain would be OK with her dating his best friend, Brock Thaddeus, but she’s dangerously wrong. Cain is no normal hockey star, he’s a Dragon Shifter.

When Michelle chooses another man over him, will Cain be able to control the dragon within him, or will fire consume them all?

AUTHOR’S NOTE: This is a 58-page stand-alone story with an HEA, so no cliff-hangers! Story contains mature themes and language and is intended for 18+ readers only.
more
Amazon Other stores
Bookmark  Rate:

'Taken by Two Hockey Dragons' is tagged as:

Buy 'Taken by Two Hockey Dragons' from the following stores: