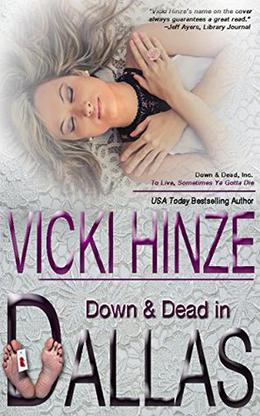 Christine Branch is elated. Finally her sister, Caroline Branch Easton, has left made the break from her abusive ex, Martin Easton, and returns to Dallas to Christine’s ranchette to heal. Only Martin refuses to let her go. Within twenty-four hours, his thugs are doing everything they can to intimidate Christine into returning home. Christine knows she must do something to get her sister the time and space she needs to heal—and she concocts a plan:

Operation Switch and Bait. The sisters trade lives and Christine baits the thugs into following her. It works! Caroline undergoes counseling, eventually divorces Martin, though he refuses to accept it, and the operation continues… until Martin shows up at the ranchette and issues a return-home ultimatum. Christine’s had enough. She ends the operation, resumes her identity and disappears.

Christine continues with the switch, hoping confusion of two Carolines will assist in a clean getaway. On Christmas, Caroline calls Christine. A chef from Dallas is assisting her. She’s in Even, Georgia but within an hour leaves for Sampson Park. She’ll call again as soon as she’s settled.

But Caroline doesn’t call. And three months later, Christine remains unable to find anything on the mysterious Sampson Park, or on her sister’s whereabouts. She must take the risks of leading Martin to Even to find out what happened to Caroline.

Has she escaped, or is she to remain Down and Dead in Dallas?

'Down and Dead in Dallas' is tagged as:

Similar books to 'Down and Dead in Dallas'

More books like 'Down and Dead in Dallas'   ❯

All books by Vicki Hinze  ❯

Buy 'Down and Dead in Dallas' from the following stores: