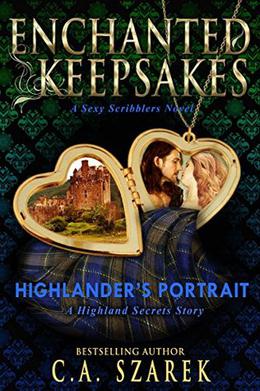 From the world of the Highland Secrets Trilogy!
Historical romance author Ashlyn George is an uninspired author. Writer’s block plagues her imagination, so her agent encourages her to go on a trip to Scotland that’s geared toward writers. She’ll try just about anything to put words on the page, since her latest manuscript is overdue.
She collides with a blue-eyed hottie that looks just like an old portrait she bought in an antique shop in Inverness.
As laird of his clan, Eoin MacLeod has been charged with protecting the famed Faerie Flag. When it changes hands, he has to ensure it’s safe—no matter when that may be. Using the Faery Stones, and his Fae blood, he time travels from the eighteenth century. He’s done it again and again, but this time he wants to bring the Flag back with him.
He didn’t count on a bonnie lass from the twenty-first century to argue, and claim it for herself. Her passion brings out desires in Eoin that make him want to put aside his duty and stake a claim of his own…on her.
more
Amazon Other stores
Bookmark  Rate: