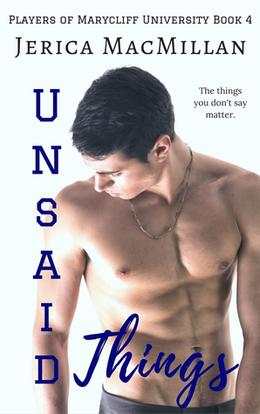 After a romantic six months, Lance and Abby's relationship feels solid, and he's excited to have her spend Christmas with his family in Texas. She doesn't know he has a diamond ring stashed in his suitcase, along with a plan to propose to her on Christmas morning.

He's forced to scrap the proposal, however, when Abby’s dead-beat brother shows up at her mom's house two days before Christmas. Abby, worried about her brother's sudden reappearance after more than a year of silence, insists on going home.

Just when Lance thought he'd broken through Abby's defenses, she puts up another one in his path. Pushing him away, she insists on dealing with her family herself, a bad idea in his mind. Will proposing reassure her that he’s in it for the long haul? Or just make everything exponentially worse?

The fourth installment in the Players of Marycliff University series follows the developing relationship of Lance and Abby from Summer Fling.  It’s a story about family, trust, and where you should turn when life gets messy. If you’re looking for a hero you can swoon over and make your next book boyfriend, one-click Unsaid Things now!
more
Amazon Other stores
Bookmark  Rate:

'Unsaid Things' is tagged as:

The 'Players of Marycliff University,' series

All books by Jerica MacMillan  ❯