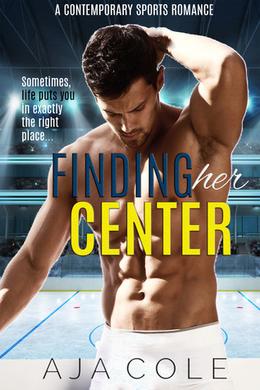 Hockey Center Greyson Mathieson is a hockey legacy, growing up with a dad that also played pro. It’s the most important thing in his life next to his Mama, and with a crucial season coming up – he’s got no time for distractions.

Greyson met Daya two years ago by chance, when he decided to blow off some steam by chatting with a stranger online. But what started as a virtual fling has come to mean more to Greyson than he ever expected…

All he can think about is meeting Daya in person and finally turning late night fantasies into the most delicious reality.

Daya Kincaid is an introverted freelance writer, with only three rules in mind when it comes to men:

1) No relationships.
2) No complications.
3) No feelings.

Finding a sexy man who was willing to bare it all for some virtual fun without any commitment or strings attached, sounded like the most perfect arrangement in the world…until he wanted the real deal and she wanted to keep her life as it was. She wants things to be kept simple, and for Greyson and his phenomenal body and his raw sex appeal to stay far, far away.

But sometimes, life puts you in exactly the right place. You just have to decide what the hell you’re going to do about it.

All Greyson wants is a chance to see what they could build, but Daya has her own set of rules and he’s playing blind. A man can only take so much. He’s not perfect by any means, but he’s trying.

With her own truths to face before she can truly trust anyone with her heart, Daya has to be careful or this might be one game that nobody wins.

Finding Her Center is a debut 60,000 word standalone novel with a HEA and no cliffhangers.
more
Amazon Other stores
Bookmark  Rate:

'Finding Her Center' is tagged as:

Similar books to 'Finding Her Center'

All books by Aja Cole  ❯

Buy 'Finding Her Center' from the following stores: